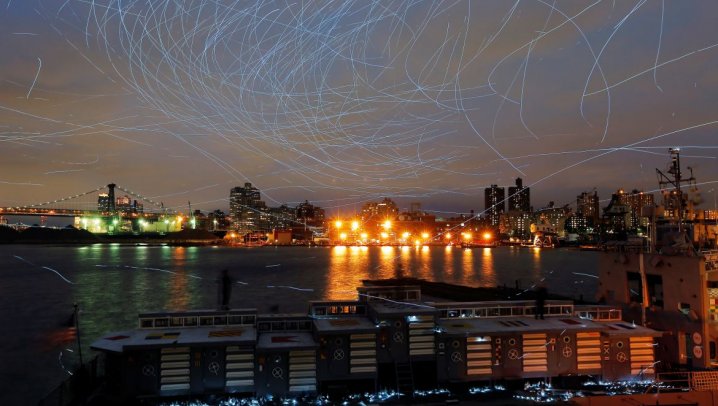 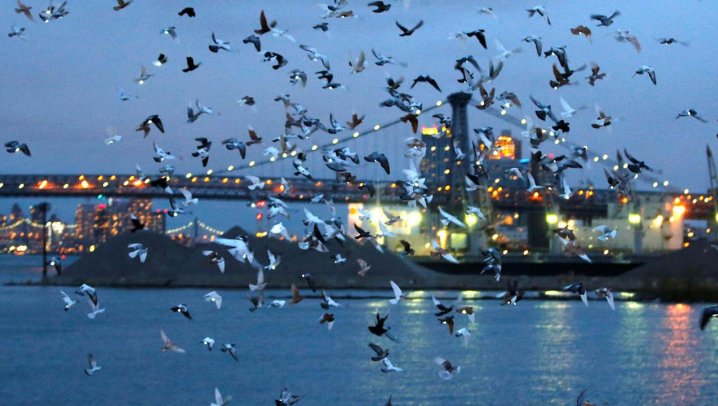 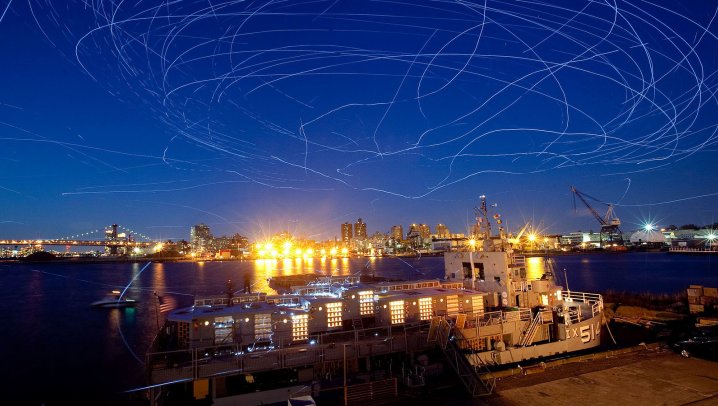 On a Saturday, past sunset a man standing on top of an aircraft carrier along the Brooklyn waterfront while waving a long bamboo pole with a black garbage bag attached to it, together with many hundreds of tiny lights which shot up like sparks which spat from a fire.

As the man who trained the pigeons whooped and hollered and raked the trash-bag flag like a giant windshield wiper, the lights shining in the darkening sky, swirling and unmaking chaotic patterns until they filled half the heavens.

Trained pigeons have lights attached to their legs. The artist Duke Riley was the man who carried the black flag, impersonating a dive-bombing hawk as he prepared his winged charges for a mass performance piece called “Fly by Night.”

For around six weekends, more than 2,000 pigeons, at the Brooklyn Navy Yard put on an avian-powered light show.

The pigeons have been staying in an 80-foot-long complex of coops, which are “waterfront luxury lofts” according to Mr. Riley. Together with his helpers, the complex of coops erected on the deck of the Baylander, which is a decommissioned Vietnam-era Navy ship. The coops’ rear windows look out onto Wallabout Bay. This Bay is where they used to be an artificial island – Cob Dock – that housed the Navy’s first messenger-pigeon fleet.

By turns whirling, majestic and quite terrifying, Saturday’s practice flight with around 700 birds evoked a series of alternate universes.

Mr. Riley, who is a rugged-looking43-year-old Boston transplant, has used pigeons as a way to carry his message before. He dispatched a small flock from Havana to Key West, for his 2013 piece “Trading with the Enemy.” Around half of the birds exported Cuban cigars which were attached like bomber payloads to their undersides, while the other half were outfitted with cameras to document the crime.

While sitting in the pilot house of the Baylander with a white-winged assistant called Tofu perched on his shoulder, Mr. Riley explained what he means by “Fly by Night.”

A few of the birds in “Fly by Night” are experts of “Trading with the Enemy,” while others are on loan from friends.

There was a silhouette in every coop window, and Mr. Riley declared the practice was a success. “The birds seemed to fly pretty well,” he said. “Usually, people want their birds to fly in tight bundles. Some guys don’t like it when one bird will fly off by itself. But I like that – some pigeons doing their own thing, acting of their own free will.”

This Pigeon Lightshow is something for the whole family to enjoy when visiting New York City, as it lights up New York City's sky making it a unique scenery.